We have 14 Galighticus ancestor notes:

This is a note which is a fairly new addition to the line of Galighticus Ancestral Money, and it’s very, very specific, and has lots and lots of power.

If you look here, you will see the Blue Buddha, who is Bajra Guru, and he is also a divine healer. Many lineages require divine healing even when they leave the body and go into the human afterlife.

Sometimes when people go into some of these astral planes, they stay there for hundreds and thousands of years because they are still healing from the result of their death or a long, debilitating disease; as lots of souls give themselves the permission to have, which in turn allows them to close out their affairs with the living relatives of their lineages.

This note also is known as the Funerary note. It is a Seven Hundred and Ninety-One Decillion Dinar, which has lots and lots of power. This is also backed by the Bank of Heaven, which belongs to a system of gods that are proprietary to Galighticus.

As you will see, a very interesting version of the goddess is known as Fortuna Praenestina, and she also is a god of extreme wealth, fortune, luck and beauty. She is also known to have lent her energy to this note.

If you look closely, you will see there are vaults here, private jets, mansions, gold blocks, as well as silver blocks you have a very sacred mantra that is on the back that you can look at in your mind and send the benefit and the blessing, that particular mantra directly to your ancestors, Anpu  (Anubis). 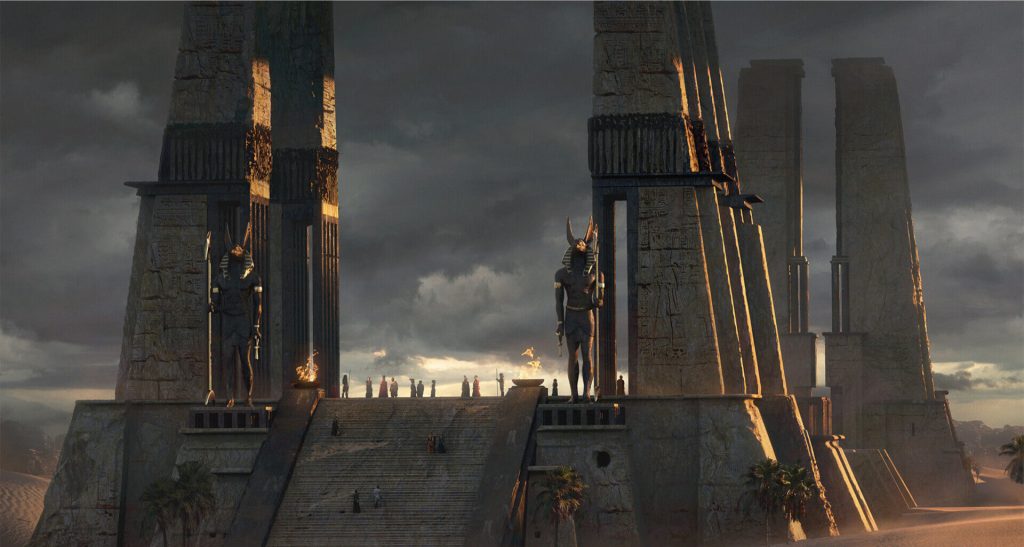 Anpu (Anubis) is the one that takes the energy of the dead onto their journey in the underworld or the Duat. Burning this note as an offering to Anubis or Bajra guru will also alert them to the need of your ancestors.

This is a Transcension Generation After Life Support Ancestral Liberation. Transcension is a facility that lots of humans that do not have divine backing don’t have the support.

We have resurrection, ascension, death. But transcension is something that all ancestors would like to have in all of the newly dearly departed.

The best way to use its utility is when someone of your loved ones, friends or someone that you are acquainted with, leads this life and is a dearly departed.

“You can burn one of these for seven days straight”.

It will help your ancestors cross over into the next life because crossing over into the next life takes a sufficient amount of energy. Instead of burning bodega candles and having candlelight vigils, this act of burning the Decillion Dinar Funerary Note™ is Two Million Times More Powerful than any vigil that you can do in any candle that you could burn. And the ancestors will be very, very happy that you have cared enough about their memory to distribute this to them.

Our next note is medium-sized, and this one is also from the Bank of Heaven, and this is a very specific note that promotes karmic ratification.
The quadrillion-euro note cultivates and delivers karmic ratification for the user. At the same time delivering a strong financial deliverance to the ancestors.

What is Karmic Ratification?

Karmic ratification is the erosion of negative karma. All humans who live on earth have a very fair degree of negative karma that needs to be ratified. This is a 48 quadrillion euro note that’s had a very large degree of finances that you will send directly to your ancestors.

The Kwan Yin £844 Duodecillion™ is dawned on by none other than the Goddess of compassion herself. This is an Eight Hundred and Forty-Four Duodecillion™ Pounds.

If you look at the bottom, you will see the series of zeros that are associated with its wealth. It’s really quite powerful. We also have the image of the Amitabha Buddha, which is known as The Celestial Buddha of the puruland, and he creates infinite light.

This also has an image of a beautiful lotus blossom that belongs to KwanYin.

KwanYin and Amitabha deliver copious amounts of financial compassion and Buddhic light to the ancestors in copious amounts necessary to quell their emotional bodies needs. And by utilising this note, you are also sending the divine offerings to the Gods themselves.

Divine Offerings for the Gods and Ancestors

Yes, you may use this as a divine offering to your Divine Parents or to the Gods that you have a Divine Relationship with. 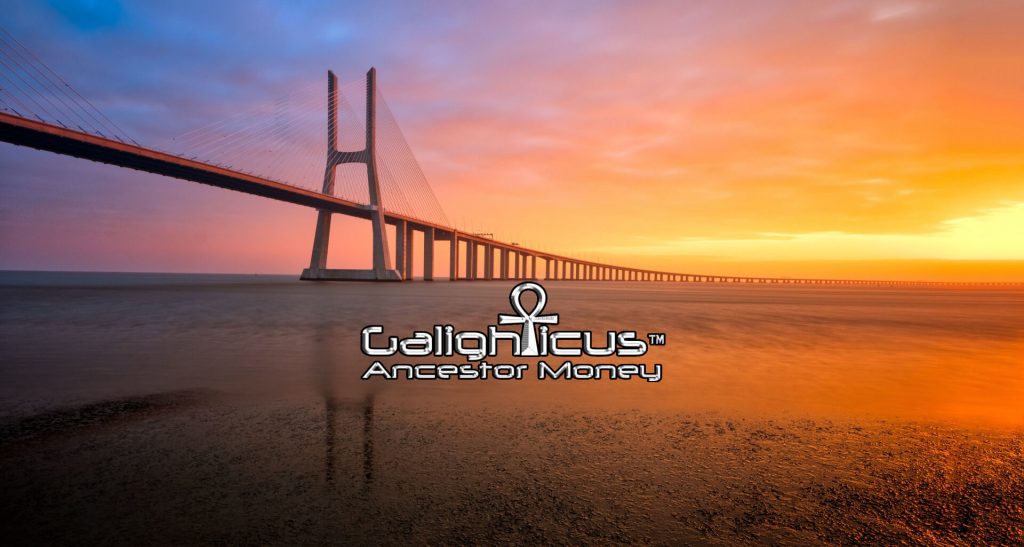 You may also use this note if you would like to build a bridge or repair it or you would like to have a boon from one of the Gods in the particular universe, there is no better way to show the Gods that you are capable of getting their attention.

How else would you do that unless you have a very large denomination?

The Golden Gun. It’s very, very powerful and it is Twenty-Four Septillion™ Pound Note, which is a staggeringly large denomination.

If you look on the front, you will see the image of a Gold Key, which is actually a Cosmic Beacon, some say an Ankh, and it bridges the gap between life and death.

Here at Galighticus, we believe in ancestral worship because the ancestors hold the key to your tomorrows. They also are able to get into places and dreams to make agreements with people that you would like to do business with, or they can change the very circumstance of your limitation and your financial challenges and oppositions.

This particular note also has the energy on the bottom, as you can see, of pure gold. It is built into the actual denomination. It also has the energy of silver. Silver and gold are two commodities that are very precious to the ancestors and the gods appreciate the adornment of its physical and celestial properties.

On the right-hand side, you will see the heart weighing ceremony. 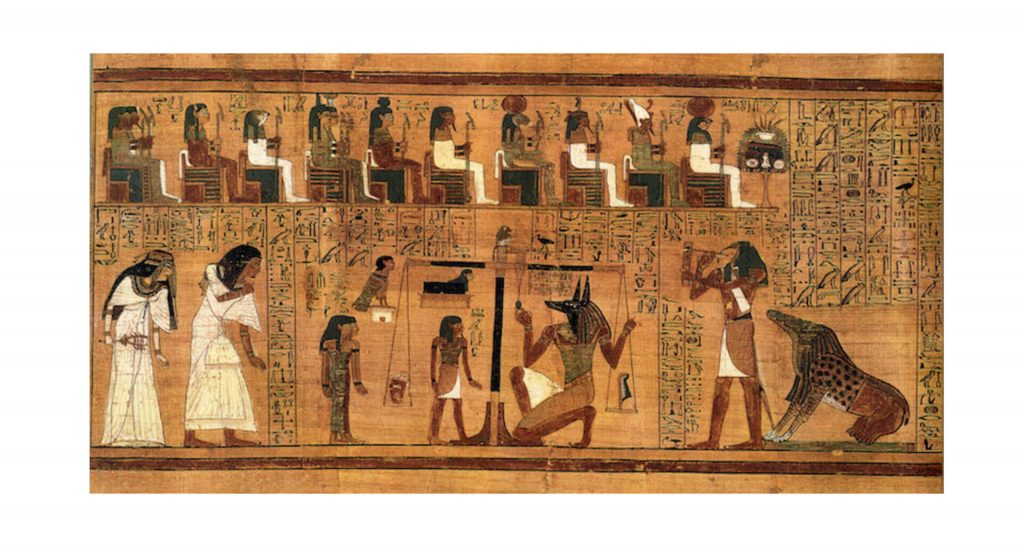 What is the heart weighing ceremony?

The Weighing of the Heart was a ceremony that the Ancient Egyptians believed would happen in the afterlife.
The heart would be weighed by the gods to see if it was light enough to go to the afterlife.

What would happen if the heart was too heavy?

If the heart was heavy, it would be eaten by the goddess Ammut or the person would go to the Underworld or disappear.

What was the heart weighed against?

The heart was weighed against a feather.

The God Anubis weighed your heart. The God Thoth (pictured above) recorded the findings. And The God Ammut and Heru stood by. If your heart was as light as a feather, you passed Maat’s test and entered your afterlife.

It is their job to observe the weighing of the hearts of the dearly departed and the newly dead as they go into the gates of the Duat and stand before the gods and give a thorough account of their lives on Earth.

When you look at the Gods of the Duat, they have a very specific job to do and they have to measure and weigh the energy of the heart, which is the conglomeration and the sum total of your doings, thoughts and actions right here on Earth.

And there also is a very specific word of power that adds to the diligence, persistence and the connectivity of being able to reach all of the ancestors from your lineages that need its support.

If you look, at The Auset Big Gun – £48 Nonillion™ Note you will see the Goddess Ma’at (The God Of Justice) and you will also see the goddess Aset or some say ISIS, this has the spirit of Anpu and we also honour him by putting on the words “Anedge hr ek Anpu”. Anpu is one of the death gods or the gods that assist all humans that die in cross over into the underworld. 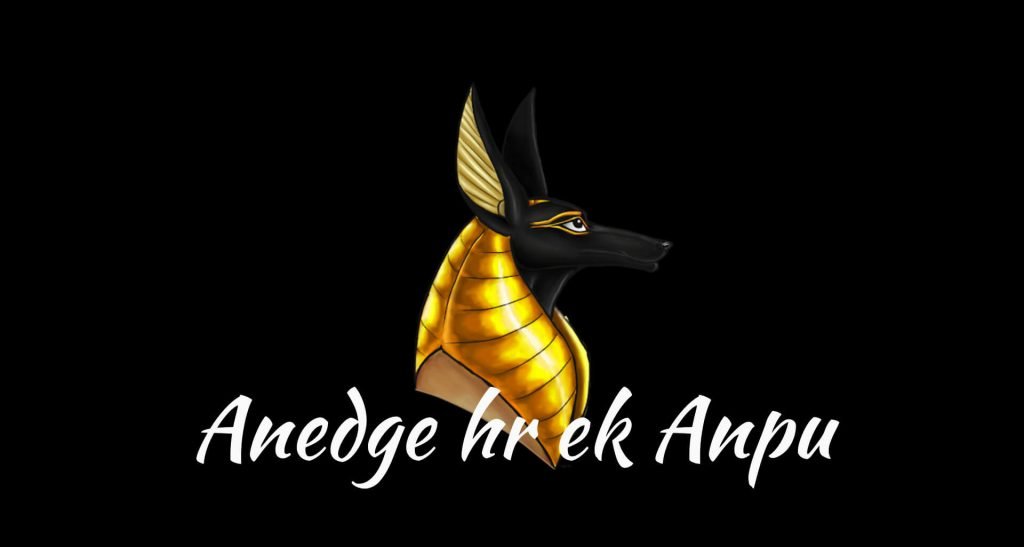 You will actually see his face. Some people have dreams of Anpu and ask me what that means. I say that it is an opportunity for you to gain his attention. And if you see him in your dreams, he may be preparing you and letting you know that it is time for your eventual departure here from Earth.

It is not something that you should take lightly or ignore. By burning this and the other notes that he happens to be upon, you can let him know that you’re not ready to go yet. 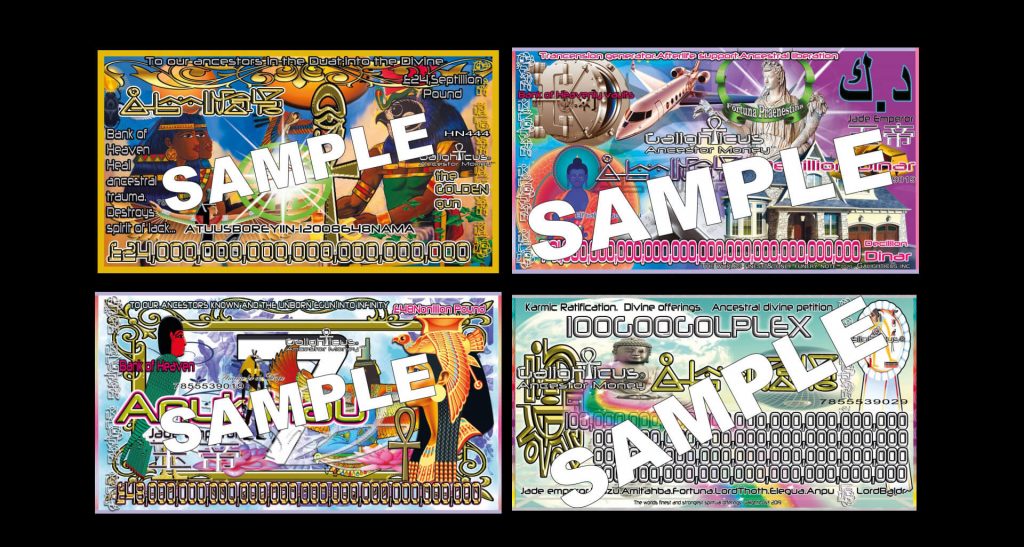 By burning this and the other notes that he happens to be upon, you can let him know that you’re not really ready to go yet. If you look at the back of the note, you will see a very powerful proclamation on the back of the Anuk Hau which means I am wealthy.

This is something that the ancestors to whom you burn this particular note will say unto you, it will make them wealthy. It also says:

“Thus, Thy Name Shall Be Written Into The Book Of The Eternal.”

A powerful act of love that you can give to your ancestors, dearly departed or friends of yours who are in a very precarious situation.

On the back of this note, it says “To All Ancestors Known And Unknown, May You Arrive In The Divine Realms Of The Eternal.” So this is a very powerful petition that petitions for the Gods to release any of the humans who are in the afterlife and elevate them to a higher condition and a higher station in life itself.

In the human afterlife, which would be the divine world and hopefully maybe one day in the divine eternal realms of existence, which is where the divine paradise world exists.

This is the Sahu Sekhmet edition, you will also see the image of Tehuti or Lord THOTH, and this is Three Hundred and Thirty-Three Quinvigintillion Pounds, which is a very, very large number.

It is so large that it takes up three rows on the bottom of this denomination. It helps to repair ancestral chaos within the lineages. 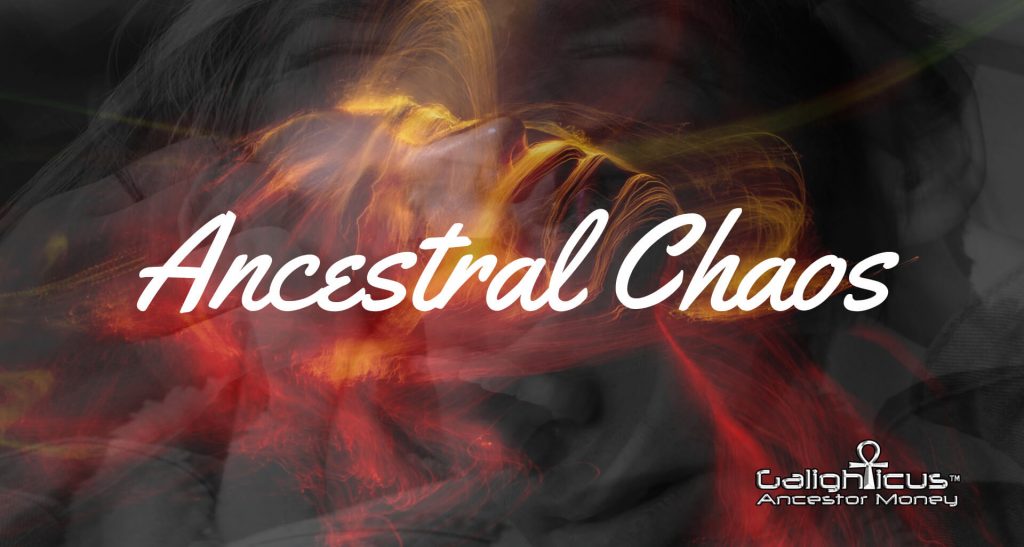 What Is Ancestral Chaos?

There are many people on the planet who are a by-product of incest or a by-product of rape. Therefore, their very existence disturbs the lineages that are in opposition to the action that forced their existence to be onto this planet.

When we utilise this, we are sending the energy of this note directly into where the conflict within the lineages happened to be when there was an ancestral lineage chaos. It creates a financial conflict in the life of the one who has been born through this arrangement. So the consistent use of this over time will liberate the soul from the opposition of the financial challenges that sometimes it has had for its entire life.

How To Burn Galighticus Ancestor Money

Light your Galighticus Super KAnd-EL or white candle, then burn 1-3 denominations of  GAM (Galighticus Ancestor Money) before you begin the day. 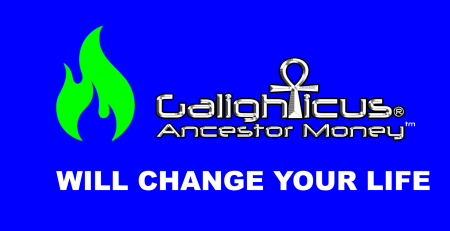 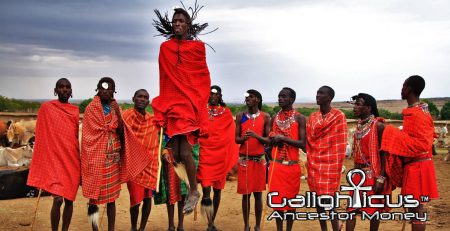 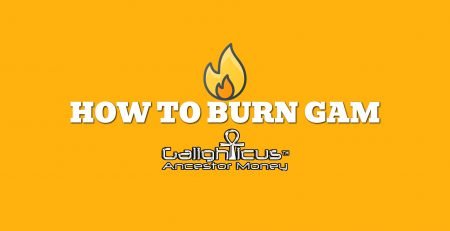 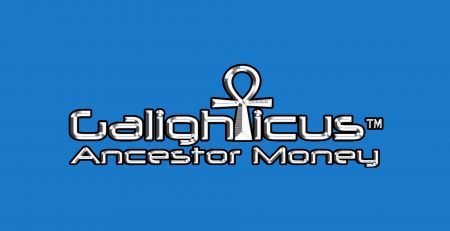